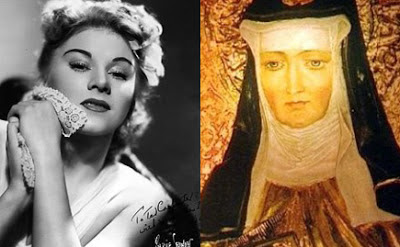 On October 7, Pope Benedict XVI declared the 34th and 35th official “Doctors of the Church” — Hildegard of Bingen and John of Avila. The latter was a crucial figure in the sixteenth century reform of the Church. Hildegard, born in 1098 to a noble family in what is now Germany, is more remote, but extraordinarily compelling for her unique genius.

She became abbess of a Benedictine monastery in Disibodenberg which, as it grew, was moved to Bingen. There she graced the Church as a philosopher, theologian, botanist, medical scientist, and musician. She charted the orthodox way through some of the more fantastic heresies and enthusiasms afflicting the twelfth century, most notoriously the Cathars. St. Bernard commended her writing to Pope Eugenius III, who had been trained by him, and after that she became well known beyond Germany. Her musical compositions have become popular in our own day, a vivid glimpse of liturgical chant at the cusp of a golden age. She is the first composer whose biography is known, and she may have written the first opera — Ordo Virtutum. In it, the Virtues sing angelic melodies while Satan only speaks, for he cannot sing.

On the day she became a Doctor of the Church, I recalled another musical Hildegarde of our own day. Hildegarde Sell, born in 1906 to a German-American family in Wisconsin, started the fashion for some entertainers to use only one name, and she became the most famous cabaret singer of her time as “The Incomparable Hildegarde.” She first appeared in films in 1933 and was the first person to sing on the new medium of television in 1936. King Gustav V of Sweden and the Duke of Windsor were devoted to her, and she was enshrined in song by George and Ira Gershwin. She appeared on the covers of Time and Life magazines, advertised as the most expensively dressed celebrity of her day. Like her patron saint, she wrote about herbal remedies, though she was more interested in their cosmetic properties than was the Doctor of the Church.

While The Incomparable Hildegarde's signature song “Darling, Je Vous Aime Beaucoup” will not be confused with St. Hildegard's Ordo Virtutum, she was a Third Order Carmelite and a daily communicant. She made a point of having the best silks and satins of her wardrobe tailored into vestments for the missions. St. Hildegard died at 82, a great age in the Middle Ages, and our Hildegarde was 99, a great age in any age. I visited her as she was dying in a nursing home, where her one room was considerably smaller than her ten-room suite at the Plaza. And instead of her favorite Renoir, there was a small lithograph of the Sacred Heart. She wore none of her famous line of cosmetics as she said the Rosary, and she never looked lovelier. She would have understood what her patroness and Doctor of the Church said: “I am a feather on the breath of God.”