Only the Logos can save an illogical world from self-destruction 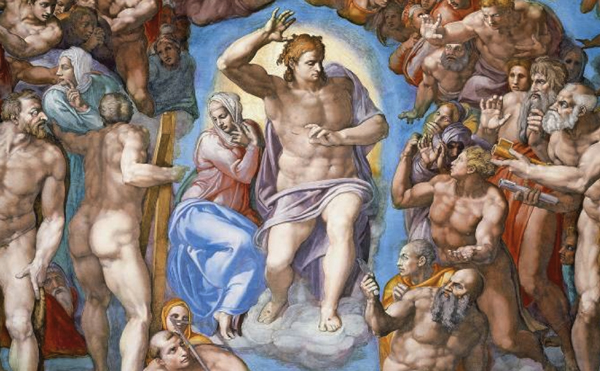 Christ will “gather the wheat into his barn, but the chaff he will burn with unquenchable fire,” St. Luke (3:17-18) calls this “good news.” Unquenchable fire hardly seems like good news, until you realize that Christ is separating good from evil, saving mankind from the degraded delusion that these categories are impressions without substance.

Many have supposed that sound education and good intentions, can construct an ideal society. God is out of the picture, and original sin is denied. The holocausts and pogroms of the modern age exposed that deadly fallacy. It was satirized well by the Edwardian writer H.H. Munro in his short story “The Toys of Peace.” A family of socialist tendencies, replaces their boys’ toy fortress and tin soldiers with a Young Women’s Christian Association building, and figures representing people like John Stuart Mill, Robert Raikes who founded the Sunday School system, a poetess, a sanitary inspector, and the astronomer Sir John Herschel. Predictably, by the end of the day, the boys have turned the YWCA into a fortress and the figures are soldiers again. Munro was a realist. Poignantly, the story was published after his death in the First World War.

Christmas celebrates that the Word was made flesh. The Logos that made all things came to us in human flesh. The Logos requires that we be logical about human nature, conflicted between good and evil. This moral logic posits the promise of Heaven and the threat of Hell. Terrible events such as the recent mass shooting in Connecticut can only be understood realistically as part of the spiritual combat that began with the Fall of Man.

Certainly, our age’s blatant contempt for God has encouraged evil, but each generation has known this moral contest. It is not confined to one nation: last year hundreds were killed or wounded in Norway which boasts of advanced social laws. Nor is it peculiar to one generation: a man blew up a school in Bath, Michigan in 1927 killing 45 including 38 children and wounding 58. In Pennsylvania 163 years before that, on July 25, a band of Lanni Lenape Indians killed a teacher and ten of his students in their little school house. Back up seventeen or so centuries and ask Mary and Joseph themselves about the massacre of innocents.

Every outrage in recent times excites the media to a prurience beyond ordinary publicity, and tempts politicians to exploit it for their own agenda. Worse is the illogic that replaces the Logos. Some logically shudder at the destruction of scores of innocent children, while illogically promoting legislation to do it on a grand scale. In our own New York City, 41 percent of all unborn innocents are destroyed every year.

Locking school doors will not keep Satan out if our hearts are open to him. Nor will banning weapons ban murder if God is banned from the conscience. Cain slew Abel without a gun. An illogical world can be saved from self-destruction only by loving the Logos who was in the Beginning, who was with God and was God.