This pope has been a very good father 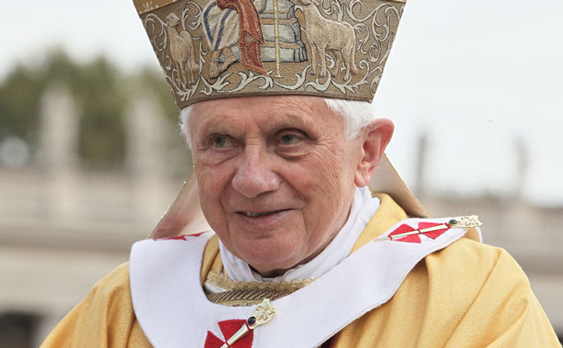 The meteorite that exploded over Russia's Ural Mountains with the force of thirty atomic bombs had the biggest impact since the one that exploded over Tunguska in 1908 with a force more powerful than all the bombs, including the atomic ones dropped in the Second World War. But such a force of nature, when observed passing safely by with breathtaking speed, can also be a sign of the beauty and brevity of all things.

So it was in “The Year of Three Popes” when the death of Paul VI was followed by the death of John Paul I just four weeks after his election, and then the election of John Paul II. Cardinal Confaloniere said of John Paul I, in the exquisite Latin for which he was famous: “He passed as a meteor which unexpectedly lights up the heavens and then disappears, leaving us amazed and astonished.”

The impact of that pope's sudden death seemed at the time to be immeasurably hurtful, and yet he made the way for many providential events. Now the gracious abdication of Pope Benedict XVI also amazes and astonishes. When he assumed the papacy, he knew the work would not be easy: “Pray for me, that I may not flee for fear of the wolves.” Without histrionics or self-pity, he quietly took up his burden in the succession of St. Peter to whom the Lord said, “Simon, Simon, Satan has desired to have you, that he may sift you as wheat. But I have prayed for you, that your faith fail not; and that when you are converted, you will strengthen your brethren” (Luke 22:31-32).

In many glorious ways, Benedict XVI has done just that. With unerring fidelity he has explained the sacred deposit of the Faith to its opponents, both cultured and uncultured, with patient eloquence and stunning insight. Many reforms in the Church’s structure and the purification of abuses were his intense initiatives. Rather like St. Francis of Assisi going to meet with the caliph of Egypt clad only in simplicity, Benedict XVI refused to wear a bullet-proof vest when he went to Turkey, turning the anger of many to respect. A new reverence and beauty in worship has been his gift to the Church through his renewal of the sacred rites, and the provision of an ordinariate for whole groups seeking full communion with the Church “amazed and astonished” many.

Now, his renunciation of the Keys entrusted to him, teaches the essence of the papacy as a stewardship that transcends the charisms of any individual. Officially, a pope is Bishop of Rome, Vicar of Christ, Successor of the Prince of the Apostles, Supreme Pontiff of the Universal Church, Primate of Italy, Archbishop and Metropolitan of the Roman Province, Sovereign of the State of Vatican City, Servant of the Servants of God. But to the world, this Pope has also been a very good Father.