In the drama of Holy Week, you are part of the cast, and the play is the real thing 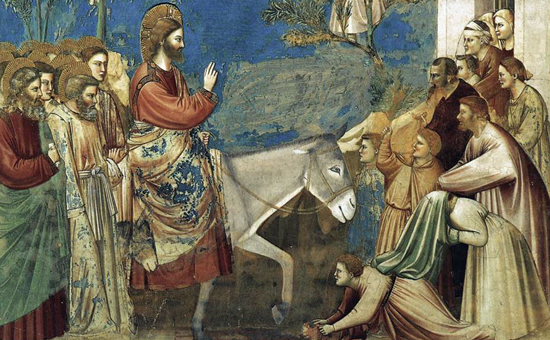 The Great Week is here, putting into perspective each day of every week. Following the events of Christ’s Passion expands our biological existence into a life of hope. The solemn ceremonies are like the axle in a wheel, and without this axle the year spins out of control. Every day of our lives has its Good Friday moments in minuscule and its Resurrection moments in majuscule. Mortal life, with all its trials, lived as a daily walk toward eternal life with Christ who is Love, “bears all things, believes all things, hopes all things, endures all things” (1 Corinthians 13:7).

The drama of Holy Week is the reverse of theatrics, for the audience is the cast, and the play is the real thing. Just as the Eucharist is the real presence of Christ, and not a reverie, so these holy days pull us into the actions that give life to a tired world. Without penance, fasting and prayer to prepare us, we would be like the spectators at the foot of the Cross and like those to whom the Risen Lord did not appear during the forty days after the Resurrection.

Because these ceremonies reveal reality, they are evangelical: no one can effectively share in them without helping others to encounter them. No Christian can live alone with Christ, for he who asked “where are the others?” will keep asking if you have brought anyone else with you.

Pope Francis has taken up the Year of Faith initiated by Benedict XVI, and lasting through November 24 of this year, to bring Christ to those who have never known him, and to those whose Christian roots have withered in the aridity of secularism. St. Francis of Assisi is a model of the “New Evangelization” in many ways, such as his meeting, along with Brother Illuminatus in 1219, with Saladin’s nephew, Malik-al-Kamil, in Egypt. This Sunni Muslim sultan had beheaded about a hundred Christian knights after the Battle of Damietta. The two friars risked their lives to meet with him and were tortured before being brought before him.

St. Bonaventure records: “The sultan asked them by whom and why and in what capacity they had been sent, and how they got there; but Francis replied that they had been sent by God, not by men, to show him and his subjects the way of salvation and proclaim the truth of the Gospel message. When the sultan saw his enthusiasm and courage, he listened to him willingly and pressed him to stay with him.” One pious but fragile tradition holds that later on the sultan was secretly baptized. We do know that Francis returned with the sultan’s gift of an ivory horn which he used for calling his friars to prayer.

When our bells ring out on Easter, they will summon the faithful, and the faithful will show their faith by bringing others to meet the Risen Lord.