“Come Holy Spirit. Enlighten the hearts of your faithful people...” 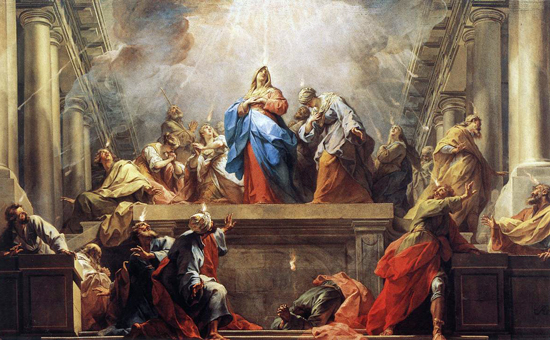 There is some sense to calling Pentecost the birthday of the Church, but it can be somewhat glib. You might say that the Church was born when Christ was born, or when water and blood, Baptism and Eucharist, flowed from Christ’s side on the Cross. You might even say that the Church was born with Adam and Eve and came to maturity when Jesus, the new Adam, and his mother Mary, the new Eve, greeted each other in the unrecorded instant before the break of Easter dawn. What we can say with precision is that on Pentecost the bond of love between the Eternal Father and the Eternal Son filled the Church. When Christ prayed the night before he died, he spoke of that unifier which is the Holy Spirit: “I made known to them your name, and I will make it known, that the love with which you loved me may be in them and I in them” (John 17:26).

The Year of Faith proclaimed by Pope Benedict XVI is to put to work the Seven Gifts of the Holy Spirit, which are given in Confirmation: wisdom, understanding, counsel, fortitude, knowledge, piety, and fear of the Lord. They give life to the Seven Holy Virtues and defeat the Seven Deadly Sins. He who has never been tempted by those sins would be an oyster or a rock rather than a human. Perhaps the most underestimated sin is sloth. It is not simple laziness: sloth is spiritual apathy that dampens ardor for serving God in our short lifespan. An example of this is an individual who recently complained about Pope Francis canonizing the 813 martyrs of Otranto, since it might be taken as an affront to Islam. We cannot pretend that they were martyred by wild Methodists brandishing water pistols, but the real problem is that slothful souls cannot understand why anyone would give one’s life for Christ. Rather, Pope Francis said, “As we venerate the martyrs of Otranto, let us ask God to sustain those many Christians who, in these times and in many parts of the world, right now, still suffer violence, and that he give them the courage and fidelity to respond to evil with good.”

In our corner of the Church, which is New York, sloth is more subtle than heresy or blasphemy or wrath. Notwithstanding all the good things in our archdiocese, it is significantly below many other areas of our nation in attendance at Holy Mass and in priestly vocations. This is not what one would expect of a people filled with the Holy Spirit. With the beauty of worship in our parish, and the springtime of vocations exemplified by two of our young men being ordained this month, we too may risk becoming smug, a condition as ugly as it sounds, forgetting that there is much more to do. “Come Holy Spirit. Enlighten the hearts of your faithful people.”