Evil, be thou my good 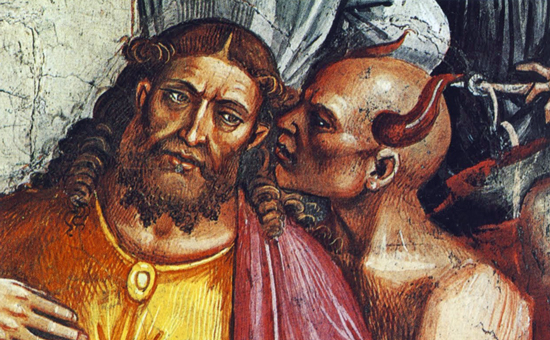 With my parents at a performance of Gounod's Faust at the opera some years ago, when Marguerite went mad in Act V after killing her baby, my mother let out a gasp that embarrassed me, for we were in a box over stage left and conspicuous. Now I bless my mother because that maternal empathy is the heart of civilization. “A voice was heard in Ramah, Rachel weeping for her children” (Jeremiah 31:15). Stifle the mother, and you stifle the child, and the world dies. Our Lady, being a take-charge kind of woman, as was evident at the wedding in Cana, may have been a midwife often in Nazareth, weeping at the loss of infants as she surely did when the innocents were massacred in Bethlehem.

In the opera, the repentant Marguerite is taken by angels singing “Salvation!” But Faust, who bartered his soul to Mephistopheles before fathering Marguerite's child, is bound to that Satan who, in the words of Milton, bids “Evil, be thou my good.” Anyone who calls evil good, moves discourse about infanticide to a very dark place.

On April 26, President Obama, the first sitting president to address Planned Parenthood, not only thanked that organization which aborts around 300,000 children a year, but added, “God bless you.” Evil, be thou my good.

On June 13, Nancy Pelosi said that the abortion issue is “sacred ground.” Evil, be thou my good.

On June 20, a New York Times Op-Ed contributor described the aborting of her 23-week-old son, who had a heart defect: “I felt my son’s budding life end as a doctor inserted a needle through my belly into his tiny heart. As horrible as that moment was — it will live with me forever — I am grateful. We made sure our son was not born only to suffer. He died in a warm and loving place, inside me.” Evil, be thou my good.

Our merciful Lord will hear the cry of those who make terrible mistakes, especially those who have not had the grace of being taught right from wrong. To them he offers real angels, and not singers on a stage. But he also predicted that “a time is coming when anyone who kills will think he is offering service to God” (John 16:2). Like Faust, such people ask God to bless destroyers of life, and call the killing fields “sacred ground,” and even describe the womb of a mother who kills her child as a “warm and loving place.”

Blessed Teresa of Calcutta said that no one is safe around a mother who would kill her own child. Anyone who makes a Faustian bargain knows that even Christ is not safe around such a mother: “Inasmuch as you did it to one of the least of these my brethren, you did it to me” (Matthew 25:40). Satan calls evil good. Christ calls it crucifixion.