With a little background knowledge, we can read Jesus’ parable of the talents with fresh eyes 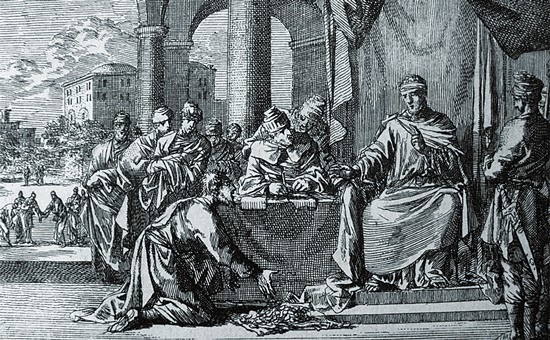 The attendance at our daily Mundelein Seminary on Labor Day weekend was sparse. Many of the students had gone home while others were on a special tour of Chicago churches. The celebrant and preacher for the Sunday Mass was Fr. Robert Schoenstene, our veteran Old Testament professor. Fr. Schoenstene offered the best interpretation I’ve ever heard of a particularly puzzling parable of the Lord, and I wanted to make sure his reading got a wider audience.

The parable in question is the one concerning the rich man who gives talents to three of his servants and then sets out on a journey. Upon his return, he assesses the situation and discovers that the servant to whom he had given five talents had invested them fruitfully and that the servant to whom he had given three talents had done the same. But he finds, to his chagrin, that the slave to whom he had entrusted one talent had simply buried the wealth and had garnered neither gain nor interest. Angered, he orders that the one talent be taken from the timid servant and given to the servant who had invested most boldly. And then comes the devastating moral lesson: “For to everyone who has, more will be given and he will grow rich; but from the one who has not, even what he has will be taken away.”

The standard reading of this story—on display in thousands of sermons and fervorinos—is that the talents symbolize gifts and abilities that God has given to us and that he expects us to “spend” generously or “invest” wisely. This interpretation is supported by the fairly accidental relationship that obtains between “talent” in the ancient Biblical sense of the term and “talent” in ordinary English today. Fr. Schoenstene specified that a talent in ancient times was a measure of something particularly weighty, usually silver or gold. A single talent might represent as much as 50 pounds of precious metal and, as such, was not something that one carried around in one’s pocket. We might make a comparison between a talent and a unit of gold kept at Fort Knox, or an ingot of silver preserved in a safe deposit box. What the contemporary reader will likely miss, and what the ancient Jewish reader would have caught immediately, is the connection to heaviness: a talent was weighty, and five talents was massively heavy. Heaviness would have brought to mind the heaviest weight of all, which was the kabod of Yahweh. That term was rendered in Greek as doxa and in Latin as gloria, both of which carry the connotation of luminosity, but the basic sense of the Hebrew word is heaviness, gravitas.

And this kabod Yahweh was to be found in the Jerusalem Temple, resting upon the mercy seat within the Holy of Holies. Therefore, what was heaviest (most glorious) of all was the mercy of God, which abided in infinite, inexhaustible abundance in the Holy Temple.

In light of these clarifications, we can read Jesus’ parable with fresh eyes. The talents given to the three servants are not so much monetary gifts or personal capacities; they are a share in the mercy of God, a participation in the weightiness of the divine love. But since mercy is always directed to the other, these “talents” are designed to be shared. In point of fact, they will increase precisely in the measure that they are given away. The problem with the timid servant who buried his talent is not that he was an ineffective venture capitalist but that he fundamentally misunderstood the nature of what he had been given. The divine mercy—received as a pure gift—is meant to be given to others as a pure gift. Buried in the ground, that is to say, hugged tightly to oneself as one’s own possession, such a talent necessarily evanesces. And this is why the master’s seemingly harsh words should not be read as the punishment of an angry God but as an expression of spiritual physics: the divine mercy will grow in you only inasmuch as you give it to others. To “have” the kabod Yahweh is precisely not to have it in the ordinary sense of the term.

What comes to mind here is the most famous of all of Jesus’ parables, namely, the story of the Prodigal Son. Using a term that also carried a monetary sense in ancient times, the younger son says, “Father give me my share of the ousia (substance or wealth) that is coming to me. Notice how in one sentence, he manages to mention himself three times! The father gives away his ousia, for that is all he knows how to do, but the foolish son squanders the money in short order. The spiritual lesson is the same: the divine ousia is a gift and it can be “had” only inasmuch as it becomes a gift for others. When we try to cling to it as a possession, it disappears.

How wonderful that these ancient stories, once we unpack their spiritual significance, still sing to us today.