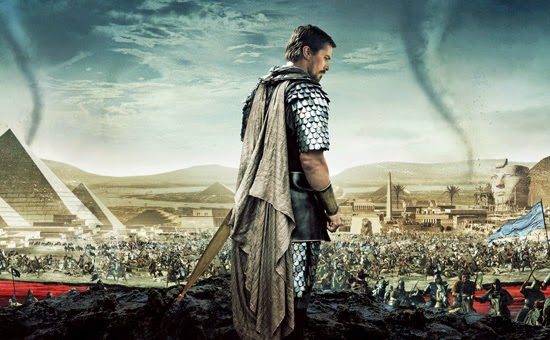 Ridley Scott’s new film “Exodus: Gods and Kings” features Moses, the Pharaoh, hundreds of thousands of slaves making their way across the floor of the Red Sea, all ten plagues, the burning bush, and even the angel of Yahweh in the form of a petulant eleven year old boy with a British accent. And yet, the movie is spiritually flat, as though its makers had read the Biblical story but understood precious little of its theological poetry.

Many commentators have focused their critical attention on the portrayal of the angel as an annoyed little boy, but in itself that choice didn’t bother me. Let’s face it: it’s next to impossible to represent God in a cinematically adequate way. For Charlton Heston, the God of Mt. Sinai was a disembodied voice (actually Heston’s own, dramatically slowed down) and flashes of fire. I’m not at all sure that this was better than Ridley Scott’s version, and in point of fact, the weird kid caught something of the unnerving, unsettling, more than vaguely frightening quality of the God disclosed in the Old Testament.

The problem is the way the relationship between Moses and the God of Israel is presented. In the Biblical telling, Moses, like many of the other heroes of Israel, was compelled to pass through a long period of testing and purification in order to prepare himself to receive the divine word. Only when he had been sufficiently humbled and purified was he able to take in the presence of God and to accept the dangerous mission of liberation that God gave him. Ridley Scott’s Moses did indeed spend years in the desert to the east of Egypt, but he seems little changed from the self-absorbed, violent, and worldly prince of Egypt that he had been. And thus, he accepts the angel’s charge, not with joy and spiritual enthusiasm, but with a kind of resentment. And whenever the child appears to Moses in the remainder of the movie, the liberator seems annoyed, put upon. In the book of Exodus, on the other hand, Moses is utterly fascinated by God and drawn ever deeper into union with God’s mind and purpose. So transformed was he after one encounter that his face shone with the brightness of divine glory. How far this is from Christian Bale’s brooding Moses who seems to wish that God would just leave him alone!

This misconstrual of the rapport between God and Moses leads to a second major problem with Scott’s film, namely, the reduction of the Exodus to the story of political liberation from a tyrannical system of government. Never does Scott’s Moses tell the people that their God had directed him to free them, and when the tribes of Israel make their way successfully across the Red Sea, no one mentions God or breathes a word of thanks to him. On the Scriptural telling, of course, the crossing of the Red Sea is followed immediately by an ecstatic song of thanksgiving: “I will sing to the Lord, for he is gloriously triumphant; horse and chariot he has cast into the sea. My strength and my courage is the Lord, and he is been my savior…Who is like to you among the gods, O Lord? Who is like to you, magnificent in holiness?” (Ex. 15:1-2; 11) In point of fact, that last line is, arguably, the key to interpreting the entire book under consideration. Seen aright, Exodus is not telling a story primarily of political liberation (though that is part of it), but rather a story of spiritual liberation from false gods.

It is crucially important to note that when Moses first approaches Pharaoh—in the Bible, not the movie—he asks that his people might be freed so that they could worship the true God. The implication is that Israel has been enthralled, not only to an oppressive political leader, but to a false and corrupt religious system, which has compelled them to worship in the wrong way. When Pharaoh refuses, God visits upon Egypt the famous plagues, and we have to see that these are not simply arbitrary wonders of nature, but rather challenges to false gods. The ancient Egyptians worshipped the Nile as a source of life, but the God of Israel turned it to blood, killing off the life within it and sending forth from it, as a consequence, the plagues of frogs and gnats. They also honored the sun as a god who gave light to the world; but the God of Israel darkened the sun, visiting darkness upon the land. Finally, they worshipped the Pharaoh and his family as divine avatars, but Yahweh took the breath of life from Pharaoh's son and left the king himself utterly defeated.

Only after this dethroning of the gods of Egypt did Pharaoh let the people go so that they might give right praise. In this regard, there is a compelling link between the narrative of the plagues and the opening verses of the book of Genesis. As we hear of the various creatures coming forth from the hand of God—light, the earth, sun, moon, stars, the animals, etc.—we realize that all of these things were, at one time or another in the ancient world, looked upon as gods. By insisting that they are all creatures, the author of Genesis is effectively dethroning them and holding off the danger that they might become the object of the worship that belongs to God alone.

All of this, sadly, is absent from the Ridley Scott film, which is precisely why the movie, for all of its special effects and decent acting and attention to the details of the biblical account, is incapable of lifting us up spiritually.