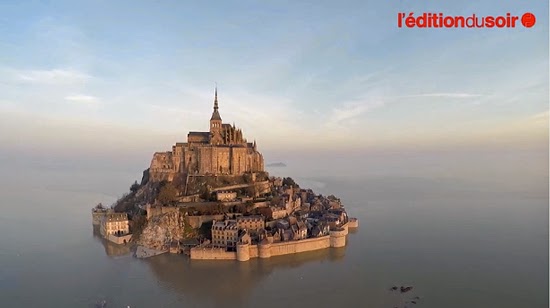 We can't embed the video here, but you can see it by clicking clicking here.

Mont St-Michel is a Benedictine Abbey, in the Diocese of Avranches, Normandy, France.

Description. It is unquestionably the finest example both of French medieval architecture and of a fortified abbey. The buildings of the monastery are piled round a conical mass of rock which rises abruptly out of the waters of the Atlantic to the height of 300 feet, on the summit of which stands the great church. This rock is nearly a mile from the shore, but in 1880 a causeway was built across the dangerous quicksand that occupies this space and is exposed at low water, so that there is now no danger in approaching the abbey.

History. The monastery was founded about the year 708 by St. Aubert, Bishop of Avranches, and according to the legend, by direct command of the Archangel Michael himself, who appeared to the bishop in a dream on three separate occasions. About 966, Richard the Fearless, third Duke of Normandy, finding the community in a relaxed condition, installed Benedictines from Monte Cassino at Mont-St-Michel. A few years later, in 1017, Abbot Hildebert II began the colossal scheme of buildings all round the rock which should form a huge platform level with the summit, on which the abbey church might stand. In spite of the enormous difficulties involved in the design, difficulties increased by fire and the collapse of portions of the edifice, the great scheme was persevered in during five centuries and crowned by the completion of the flamboyant choir in 1520.

Even among religious communities, such an instance of steadfast purpose and continuity of plan stands unrivalled; but the completion was only just in time. In 1523 the abbey was granted in commendam to Cardinal Le Veneur and the series of commendatory Abbots continued until 1622 when the abbey, its community reduced almost to the vanishing point, was united to the famous Congregation of St-Maur.

At the French Revolution the Maurist monks were ejected and the splendid building became a prison for political offenders while, with unconscious irony, the name of the place was changed from Mont St-Michel to Mont Libre. In 1863 the prison was closed and for a few years the abbey was leased to the Bishop of Avranches, but in 1872 the French Government took it over as a national monument and undertook, none too soon, the task of restoration. The work has gone on almost continually ever since, and the restorers must be praised for the skill with which the great pile has been saved from ruin, and the good taste with which the whole has been done.

Architecture. This vast group of buildings has been the subject of several important monographs. Speaking generally, the monastic buildings consist of three main stories. Of these, the two lower take the form of vast irregular rings completely enclosing the natural rock, which forms a core to the whole edifice. The third story rests partly on the two lower stories and partly on the apex of the rock which is found immediately beneath the pavement of the church.

The most remarkable part of all is the mass of buildings known as "la merveille" (the marvel) on the north side of the rock facing the ocean. This vast structure, half military, half monastic, is built wholly of granite quarried on the mainland, and was entirely constructed between the years 1203 and 1228. Its foundations are one hundred and sixty feet above the sea level, and it consists of three stories of which two are vaulted. The lowest contains the almonry and cellar; above these come the refectory and "hall of the knights", on which again rest the dormitory and the cloister. The last named building, which is perhaps the finest gem of all, has a double arcade so planned that the columns in one row are opposite the centre of the arches in the other--a unique arrangement of wonderful beauty.

The church is cruciform with a Norman nave which was formerly seven bays in length, but the three western bays were destroyed in 1776. The central tower has lately been restored and crowned with a copper-covered spire surmounted by a gilded statue of St. Michael by M. Frémiet. The choir is apsidal and has a chevet of chapels with a crypt or lower church beneath.

Legacy. The position of the abbey rendered it of the highest strategic importance especially during the wars with England, and both it and the little town that had grown up at the foot of the rock on the land side, were enclosed by strong fortifications during the fourteenth and fifteenth centuries. So impregnable was the rock made in this way that, although frequently attacked by superior forces, it was never captured. The abbot was also commandant of the place by appointment of the King of France, and he was empowered to bestow feoffs on the nobles of the province who bound themselves in return to guard the abbey in time of war. In 1469 King Louis XI founded the Order of St. Michael, and held the first chapter of its knights in the "salle des chevaliers."

It is said that the cockle shell, horn, and staff, which became the recognized insignia of a pilgrim from the thirteenth century onwards, take their origin from Mont-St-Michel. The staff was used to test the path across the treacherous quicksand, the horn served to summon aid should tide or fog surprise the pilgrim; while the cockle shell was fixed in the hat as a souvenir to show that the pilgrim had accomplished his journey in safety. The abbey bore as its arms a cockle shell and fleurs-de-lis with the significant motto "Tremor immensi Oceani".