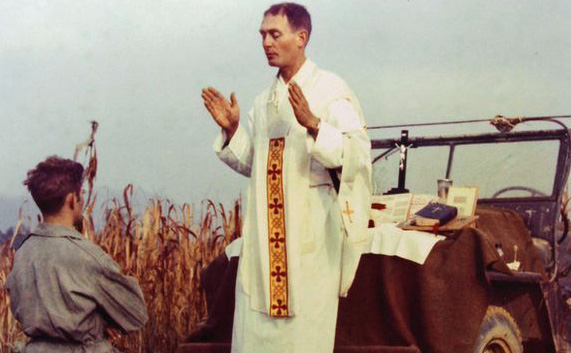 The Geneva Convention’s classification of military chaplains as noncombatants has traditionally been interpreted in the United States to mean that chaplains normally do not carry weapons. This often puts them in precarious positions when they are in war zones. Over four hundred chaplains have been killed in the line of duty. Catholic chaplains are especially exposed to dangerous situations by their obligation to administer Absolution and Anointing. They have received every kind of decoration for valor, and seven have been awarded the Medal of Honor.

All four chaplains awarded the Medal since the Civil War have been Catholic. Among them, Lieutenant Vincent Capodanno, a Maryknoll priest and Navy chaplain, who served with the Marine Corps and was killed while aiding the second Platoon of M Company at the battle of Dong Son in Vietnam, has been proposed for heaven’s highest honor, canonization as a saint.

The military chaplaincy is under threat by our own government as part of its social agenda. One year ago, the Army’s Office of the Chief of Chaplains tried to forbid Catholic chaplains from reading a statement from the Military Ordinary, Archbishop Timothy Broglio, who oversees all priests in the Catholic Ordinariate for the Armed Forces, in which he objected to federally mandated health insurance covering sterilization, abortifacients and contraception in violation of the right to religious freedom. Now the government would compel chaplains to acquiesce in “same-sex” simulations of marriage. The Army’s deputy chief of staff in charge of personnel has said that military members who dissent from this agenda are “bigoted” and “need to get out.”

As behavior contrary to Christian morality becomes a civil right, Catholics in particular could soon become, quite literally, outlaws. Our current President recently announced that he will disobey a provision in the National Defense Authorization Act, signed by his own hand, which states that chaplains cannot be forced “to perform any rite, ritual or ceremony that is contrary to the conscience, moral principles or religious beliefs of the chaplain.”

I am always edified by the sacrificing spirit of good soldiers, and as a chaplain to West Point alumni here in New York, I am pleased when cadets serve at Mass. Governments that have tried to manipulate soldiers and doctors and teachers in perverse ways have always had a short shelf life. The nineteenth-century French political philosopher Frédéric Bastiat warned: “When misguided public opinion honors what is despicable and despises what is honorable, punishes virtue and rewards vice, encourages what is harmful and discourages what is useful, applauds falsehood and smothers truth under indifference or insult, a nation turns its back on progress and can be restored only by the terrible lessons of catastrophe.”

Military chaplains do not bear arms, but they have recourse to another arsenal: “Therefore take unto you the armour of God, that you may be able to resist in the evil day, and to stand in all things perfect” (Ephesians 6:11).