The surest way to persecution is to say, “It can't happen here” 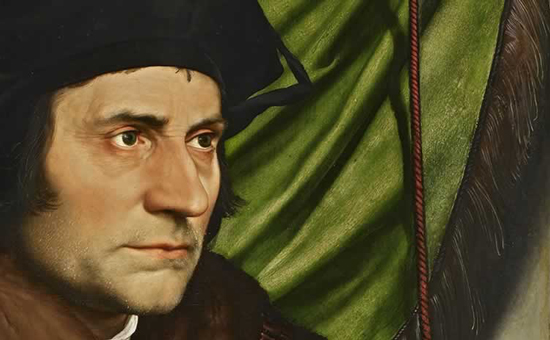 Our parish is blessed with a shrine to Saint Thomas More. The young artist who painted it after Holbein was a refugee from communist Eastern Europe. He did such a good job that Cardinal Egan, dedicating it, said that he would not be surprised if this were the original.

We recently celebrated the joint feasts of Thomas More, who was Chancellor of England, and John Fisher, Bishop of Rochester. Their personalities were different in many ways, and it was almost a miracle that an Oxford man and a Cambridge man got on so well and eventually were canonized together. The Act of Succession and the Act of Supremacy were the challenges that King Henry VIII threw at them, and the saints returned the challenge. The issues were rooted in natural law: the meaning of marriage and the claims of government. These are the same issues that loom large today. Whatever our courts of law may decide about these matters, Saint Thomas says: “I am not bound, my lord, to conform my conscience to the council of one realm against the General Council of Christendom.” In 1919, G. K. Chesterton predicted with powerful precision that great as More’s witness was then, “he is not quite so important as he will be in a hundred years’ time.”

For every courageous saint back then, there were many who instead took the safe path of complacency. More’s own family begged him to find some loophole, and — after the sudden deaths of eight other bishops — Fisher was the only one left who acted like an apostle. Those who opted for comfort and wove the lies of their world into a simulation of truth had a banal and shallow faith that Pope Francis has called “rose water.” It is a good image, for rose water is not blood and cannot wash away sin.

The “Man for All Seasons” wrote to his beloved Margaret from his cell in the Tower of London: “And, therefore, my own good daughter, do not let your mind be troubled over anything that shall happen to me in this world. Nothing can come but what God wills. And I am very sure that whatever that be, however bad it may seem, it shall indeed be the best.”

The “Fortnight for Freedom” extended from the vigil of the feasts of Fisher and More to July 4, but its prayers continue, as the Church’s many charitable and evangelical works are threatened by our present government’s disdain for the religious conscience, most immediately evident in the Health and Human Services mandate and the redefinition of marriage. In 1534 Henry VIII’s arrogation of authority over the Church was quickly followed by a Treasons Act which made it a high crime to criticize the King. In contemporary America as in Tudor England, the surest way to let that happen is to say, “It can't happen here.”