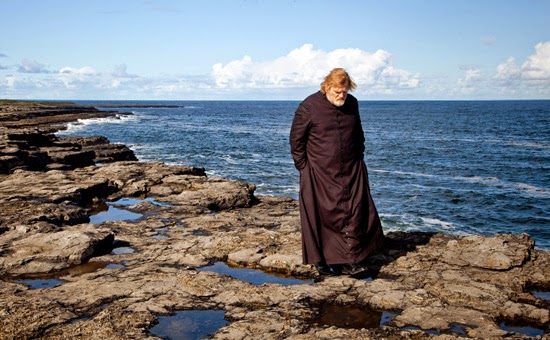 St. Pope John Paul II said that a priest should have the heart of Christ the Good Shepherd. Far too many saccharine paintings of effeminate Jesuses in the midst of delicate lambs have conduced toward a misconstrual of this image as something sentimental and harmless. But shepherds not only had the smell of their sheep (to use Pope Francis’s language), but they also wielded a stick, meant to bring back strays and to fend off threats. Real shepherding was, and is, a dirty and hard-edged business.

John Michael McDonagh’s film “Calvary” shows, with extraordinary vividness, what authentic spiritual shepherding looks like and how it feels for a priest to have a shepherd’s heart. The movie opens in the quiet of the confessional, where Fr. James, played by the always-compelling Brendan Gleeson, waits to receive the confession of a penitent. What he hears, however, is not a list of sins, but a brutal threat: “I will kill you Sunday next. Say we meet on the beach?” The awful words are coming from a man who had been sexually abused, across many years, by a priest and who now wants to seek his revenge by eliminating a man he admits is a good priest. The story then unfolds as Fr. James’s passion week, the stations of the cross, as he makes his way to his own Calvary.

We see immediately that he is a pastor who knows his people and their struggles. And we also see that this knowledge is not abstract or distant, but rather is born of very close and sympathetic contact with them. By foot, by boat, or by car, he visits the homes of his parishioners and addresses their practical and spiritual needs. Moreover, he is not afraid to take them to task when he sees them walking on an errant path. The people to whom he ministers—a sexually promiscuous woman, a suicidal old writer, a young man caught up in all forms of pornography, a deeply embittered and corrupt financier, an atheist doctor more cynical than Richard Dawkins, and even an imprisoned serial killer—represent the spiritual wasteland that has emerged in Ireland in the wake of the clergy sex scandals and under the influence of postmodern indifferentism. In his dealings with these people, Fr. James is unfailingly simple, direct, and spiritually incisive, but he is met, over and over, with mockery, condescension, even contempt. And yet, wearing the soutane and collar that unmistakably mark him as a priest, he soldiers on.

Any suspicion that the man in the confessional was only making an idle threat is eliminated when Fr. James’s church is burned to the ground, in an obvious act of arson, and when his beloved dog is found with his throat cut. Understandably enough, the frightened priest, as the fateful Sunday approaches, books passage on a flight to Dublin. The only time that we see him out of his soutane and in civilian clothes is as he makes his way to the airport to escape his fate. But as he is about to board the plane, the priest decides to return to his parish, to his people, and to the encounter with his killer on the seashore. On Sunday morning, Fr. James has a telephone conversation with this daughter Fiona (he had been married and had lost his wife prior to entering the seminary). In the course of their exchange, he says, “I think there’s been too much talk about sin and not enough talk about virtue.” “What is the greatest virtue?” Fiona asks, and her father responds, “I think forgiveness has been quite underrated.”

On the strand, an angry young man, whom we have seen throughout the film, comes striding toward the priest, gun in hand, and with astonishing courage, Fr. James meets him face to face. The tortured man spits out his bitterness toward the church and then breaks into sobs expressive of anger, regret, and deep pain. All this time, Fr. James holds his ground, offering simple words of forgiveness and hope. Finally, the man presses the gun to priest’s forehead and fires.

It seems to be the grimmest possible ending, a confirmation of the worldview of the most nihilist and despairing of Fr. James’s parishioners. But then we remember that the movie is entitled “Calvary” and that a good priest, by definition, is an alter Christus, another Christ. Jesus’ shepherding ministry came to its climax on a squalid hill outside of Jerusalem, when he stood his ground as the darkness and dysfunction of the world swept over him. The crucified Jesus did not battle evil on its own terms, but rather swallowed it up in the divine mercy: “Father, forgive them, for they know not what they do.” Fr. James, though tempted to avoid his awful confrontation with wickedness, walked all the way up his own Calvary, and dealt with sin precisely as Jesus had.

The final scene of the film is filled with Christian hope. Fr. James’s daughter comes to the prison where her father’s killer is incarcerated. Through the glass partition that separates them, he looks at her with anguish, but she looks back at him with a smile. Though no words are exchanged, it is clear that Fr. James’s heroic witness to the most underrated of virtues has had its effect. Through the ministrations of a real priest, a green shoot appears in a spiritual wasteland; Calvary is followed by resurrection.